The Longines FEI Eventing European Championships offered promising performances already on the first day of dressage. At the top of the starting field was the British individual rider Laura Collett with 25.50 minus points. With only 0.3 points distance, two riders follow in the same place in second place. Kai Rüder (GER) and Thibaut Vallette (FRA) both received 25.80 penalty points for their dressage performances.

The 29-year-old Laura Collett was downright euphoric after her successful dressage, which put her at the head of the starting field after the first day of dressage: "Of course I am overjoyed after this great performance and I am pleased that London 52 fully trusts me Has. Since he is still a little inexperienced, he can be distracted by the atmosphere in such an imposing stadium quickly. When I am with him, he knows that everything is alright and always does his best. There is so much potential in him and I am looking forward to an exciting future together. "

Kai Rüder (GER) and Colani Sunrise laid the foundation stone for their good result with an almost perfect greeting statement: "It was a test with many highlights, good traversals and great canter reinforcements. Colani has a very strong character and always wants to do everything right if you just let him. That's why I tried to stay calm and finish the exam safely. So the good grades came almost by itself. "Also Thibaut Vallette was extremely satisfied after his performance:" I'm super happy with my dressage. My horse usually goes through very good dressage and has very good movements. Today, I was able to fully call on his potential. "

In the team standings, the Belgian team is currently in the lead with two outstanding performances and just 57.60 points. Karin Donckers (BEL) was pleased with the good starting distance after the first day of dressage and was perfectly happy with the performance of her 14-year-old gelding: "If anything could be improved on our test then it would be my riding. My horse was just awesome, I could really ride everything as I had imagined. The host team from Germany is currently ranked second with 60.40 minus points, followed by the French with 64.20 points. 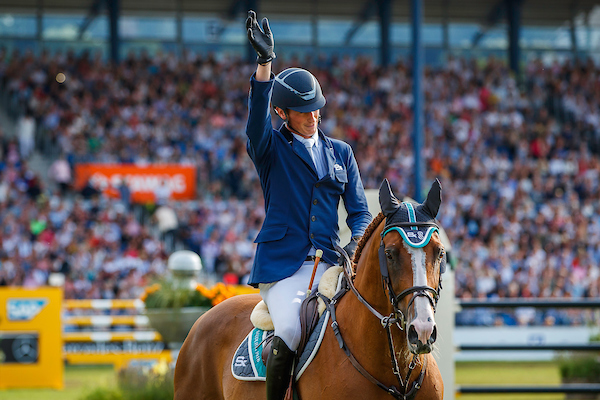 Alain Jufer takes the lead in 1.50m class in Humlikon