Day 4 of the 'North American' tournament closed with the colours of Canada, as the nation's flag was raised in the International Ring to honour and celebrate the victory of Mario Deslauriers (CAN) in the ATCO Queen Elizabeth II Cup. Posting the only double clear, Deslauriers and his partner Bardolina 2  (Clarimo x Villimey) rode to a well-deserved first place finish in this Grand Prix.

The 1.60m Grand Prix course, designed by Peter Grant (CAN), featured 14 obstacles, 18 jumping efforts and a time allowed of 93 seconds. Grant made use of the open water obstacle, as well as several tricky combinations over the 615m track. It was a tough course that saw only four clean rides qualify for the jump-off, from Deslauriers, Carlos Hank Guereirro (MEX) on H5 Just The Music, Katie Laurie (AUS) on Django II, and Frederico Fernandez (MEX) on Romeo.

Fernandez elected not to ride in the jump-off, automatically placing him in the fourth ribbon position. Carlos Hank Guereirro was first to go for the jump-off, with a rail and a refusal  that cost him four faults each, plus several time faults to finsih with a time of 62.05 seconds and 13 faults. Laurie was next up, and her one-rail round plus a time fault placed her ahead of Guereirro with five faults and a time of 54.80 seconds. Deslauriers was last to go, and his clean round with a time of 53.05 seconds placing him at the top of the leaderboard.

Deslauriers spoke to reporters following the conclusion of the competition, and expressed how tough the course was. "I thought the course designer was a little severe. A long course, double-liverpool going away from the gate. There was a lot of questions out there... I didn't think more than five, for sure," he said, referring to how many riders he thought would go clear.

"She is a big, rangey, scopey mare, a little difficult to ride, but today she jumped incredible," Deslauriers said of Bardolina who he brought to Spruce Meadows for the first time when she was an 8-year-old. "Lately, she has been a little more difficult, she has been going right on me a little bit, but I have got a new masseuse that has helped tremendously and today she was straight like an arrow and she jumped beautiful." 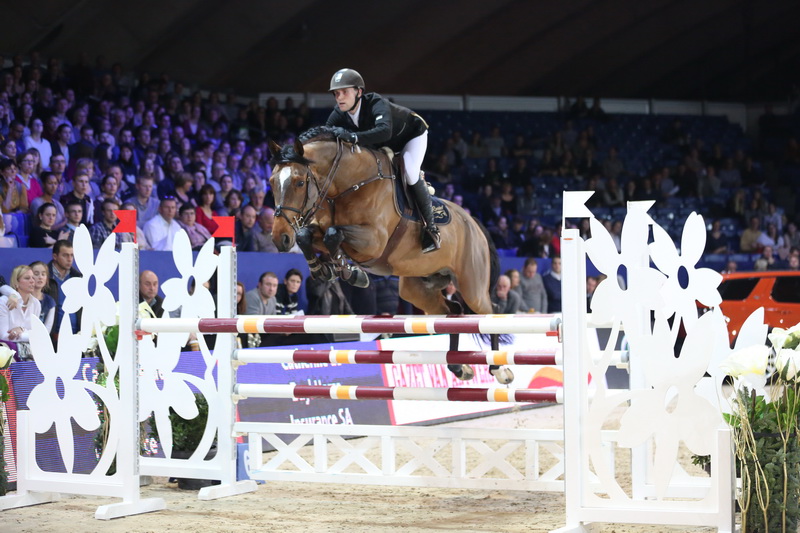