In 2017, the Lambertz Nations’ Cup comprised of the Grand Prix and the Grand Prix Spécial, the MEGGLE Prize. The Germans were already on course for success after the first part. And after the Spécial one could safely say: Mission accomplished. Isabell Werth with Weihegold, Sönke Rothenberger with Cosmo, Dorothee Schneider with Sammy Davis Jr. as well as Hubertus Schmidt with Imperio finished on a total score of 471.046 and thus left the US Americans (450.392) and the Swedes (437.635) trailing behind them.

“We have a strong and experienced team,” explained Germany’s Chef d’Equipe Klaus Roeser, who is used to winning. Even though not everything went quite as planned today. Untypically, Hubertus Schmidt’s Imperio had to make do with a score 69,451, after the horse pulled his head up after the extended trot – normally his best movement – and to add insult to injury Schmidt took the wrong course. Afterwards, it was Dorothee Schneider’s turn with Sammy Davis Jr. The beautiful black horse totally fulfilled all expectations after scoring 75.261, which meant sixth place in the individual classification of the MEGGLE Prize. Dorothee Schneider: “I must say that I am very proud of my horse: Four months ago he was an international nobody and now he is on the Nations’ Cup team here in Aachen.” Furthermore, the team Olympic gold-medallist was delighted that the 11-year-old Bavarian-bred San Remo son was much more relaxed in the impressive atmosphere of the Deutsch Bank Stadium. “He really fought for me today”.

The winners of the Grand Prix, Isabell Werth and Weihegold were the next to ride. It was the first Spécial for the Oldenburg-bred Don Schufro daughter after the Olympic Games in Rio. It is a well-known fact that the Freestyle decides the World Cup Final that she won in Omaha in the spring. Werth reported that she certainly became aware of this today. She made a mistake in the extended trot, the black mare moved into the first piaffe too hesitantly and then the pair made a huge mistake in the two-tempi flying-changes. Nevertheless, the judges awarded the pair a score of 81.059, which meant first place at that stage.

However, then came the challenger from overseas and she overtook the dressage queen. Laura Graves’ Verdades was in good form today. “He (Verdades, editor’s note) said today: “Ah, we are going right, I know it is the Grand Prix Spécial, mum!” After a more or less perfect ride the score on the display was 81.824 percent. Finally, the victory! “I have tried so often,” admittedly Graves honestly and added “That was pretty tiring!” Today, her horse gave her a wonderful birthday present.

That’s what Isabell Werth had said yesterday when her second best horse, Emilio, won the Lindt Prize. She explained why things didn’t go so well. “Well, Weihe didn’t say today when we turned right. Oh that’s what you want me to do, mum!” Instead she noticed that the mare hasn’t competed in a Spécial for a long time. “I noticed that the mare was unsure. We lacked the self-confidence we had in the Grand Prix.” Werth sincerely congratulated Laura Graves, but stated regarding tomorrow’s Freestyle, the concluding competition in the Deutsche Bank Prize, “I am sharp to win, too.”

Sönke Rothenberger rode in between Werth and Graves, as the last rider in the German team. He and his 10-year-old Cosmo got off to a strong start. But the KWPN gelding spooked during the walk tour. Then he marched through the diagonal quite relaxed. His rider wasn’t sure what had unnerved him. Further mistakes in the one-tempi flying changes and in the trot tour pushed his score down further. The end result was 78.314 percent and third place, but much more was possible. Rothenberger: “I am above all annoyed at myself. I wasn’t concentrated enough.” Asked whether he had celebrated too much. He replied “No, not all. Perhaps that was the problem!” 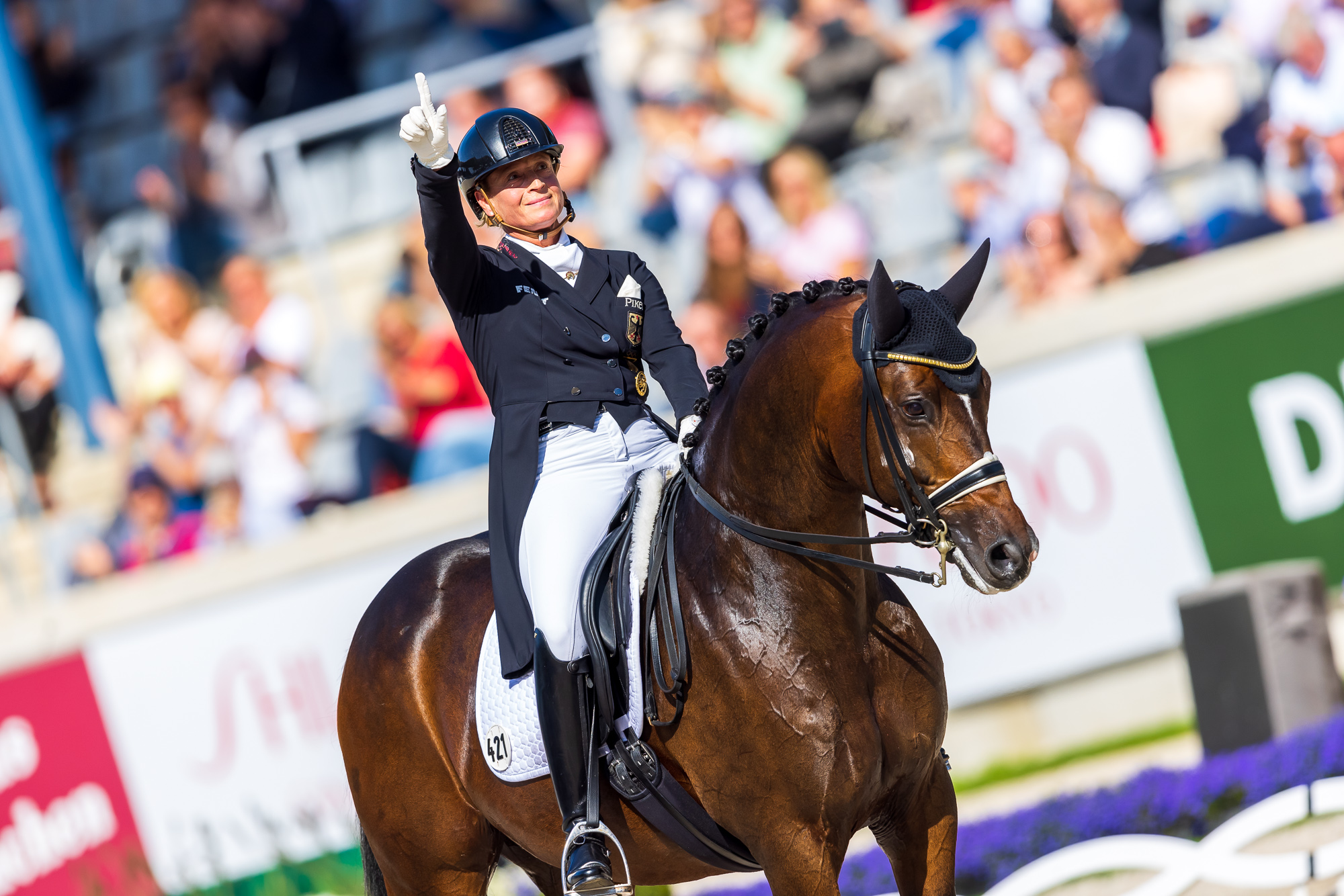